آخر الأخبار
الرئيسية بالانكليزيّة The Albanian prime minister awarded Gen Ibrahim the medal of “Grand Star “: He was the best Albanian and he worked only for the sake of humanity

The Albanian prime minister awarded Gen Ibrahim the medal of “Grand Star “: He was the best Albanian and he worked only for the sake of humanity


The Albanian leader and prime minister Edi Rama awarded on Friday October 8 \2021 the Director General of General Security Major General Abbas Ibrahim the medal of the “ Grand Star “ as a token of gratitude and appreciation for his contribution in returning Albanian  women and children from the camps of war in Northern Syria. 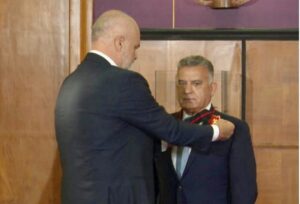 As the American poetess Maya Angelou used to say: “a hero is any person really intent on making this world a better place for all people,” and there could be no more accurate portrayal of General Abbas Ibrahim, who is here with us today and I want to thank you for his coming, than the words of the poetess

During the operations conducted in the last three years, when many children and women have been repatriated from the notorious Al-Hol camp and not only, General Abbas Ibrahim has always been our point of reference, has been our hand stretched for those children and women, he has been the best, most industrious, diligent Albanian expecting nothing in return, but the human interest to take unfortunate people out of hell

Edi Rama: Major General Ibrahim embodies all the meanings of generosity and kindness and he expresses the culture of his country and his vigorous work sends a strong message that always heralds freedom

I believe everyone remembers the extraordinary operation to save Alvin, the boy who became the symbol of solidarity and the plea of thousands and tens of thousands of citizens in Albania to save him. Well, that operation was successfully conducted thanks to General Abbas Ibrahim, who is here today for us to honour him with our gratitude. This was also the case with the repatriation of five more children shortly after and 14 more children and five women later. Whole ongoing effort to take the last hostage from that hell is closely linked with the name of General Abbas Ibrahim

It is about carrying out increasingly difficult and dangerous operations, marred by immensely complex problems posed by dangerous groups operating in those territories, as well as other significant complications because of the pandemic

But today, despite these difficulties, Alvin Berisha, Amari, Emeli and Hatixhe Rasha, Endrit Dumani and many other children now breathe freely in their homeland, lead a safe and healthy life with their families, thanks to someone who became for them an unknown parent, who unlike their true parents, who unfortunately were the cause of leading them to that hell, did not surrender until he personally escorted to the aircraft door

The general embodies all the generosity, courtesy and culture of his country, and through his daily work, shares, not only with the Lebanese community, but with everyone a strong message of humanism, freedom and rights of every human being, regardless of the religion, province, country or ideas 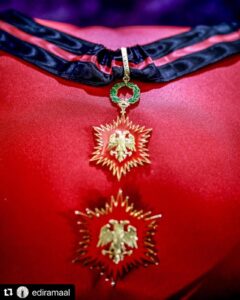 The successfully conducted operations through the General’s generous support have immensely helped our entire public opinion, our whole nation to realize the blind alley that some fathers blinded by extremism unfortunately embarked on, running their families and children

Today more than ever before people are aware of the absurdity, the incomprehensibility and the real, inhuman aspect of embarking on the path of extremism

Today, according to data we work and rely upon, because we know quite well that the data are relative, we have already repatriated more than half of Albanian nationals from those camps. The effort is underway, although the difficulties have increased, because the situation in the camps is unstable and it is now out of question to negotiate with a single authority, but it is about interacting with many individuals and many factors, one more mysterious than the other, and one more dangerous than the other

I would like to wholeheartedly appreciate the General for the courage he gave us by pledging to save all those children and for assuring us that we can deliver on that pledge. Not only that, but I would also like to thank him for creating optimum conditions for the physical security of the Albanian personnel involved in operations either in Lebanon or infiltrations inside Syria’s territory. Also, in providing all the logistical resources to assist the operation and definitely, with his capacity to influence over other political stakeholders, with some of whom we have no communication and no communication opportunity whatsoever

Of course, all this has helped our relations with Lebanon take an important friendly dimension

We have opened the Consulate General of Albania in Beirut, which again a contribution incurring no cost of whatsoever for the Albanian state, but it has been opened by our Consul general in Lebanon, Mr. Marc Ghorayeb, who is credited with the extraordinary merit as it was him to introduce us with General Abbas Ibrahim and this way a chain of friendship was created, this chain of solidarity, this chain of cooperation among people, actually united by one common goal that goes beyond politics, that goes beyond borders, beyond geography and that is the goal of making the world a better place, under the Prophet Muhammad’s credo: ” Whoever saves one – it is as if he had saved mankind entirely.”

I avail myself of this opportunity to very respectfully and friendly extend my appreciation to the Honorary Consul too and given that every time we have been meeting the General in his homeland I have begged him to visit Albania so that I can express gratitude on behalf of all Albanian people and in front of the eyes of all Albanian people, I feel honoured and we all feel honoured to call you our friend here in our own home 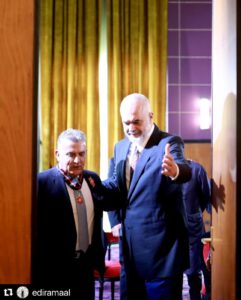 As the renowned Lebanese poet Kahlil Gibran used to say: “A friend who is far away is sometimes much nearer than one who is at hand.” This is the typical case best illustrated by the great poet’s quote

General, words for you are definitely never sufficient to reward your deed and no matter how long my speech takes, my words will again be insufficient, just like it is the Medal of Public Gratitude, which though formally expresses the highest gratitude, still remains symbolic, and it doesn’t really shows its importance like your work does

For his part , Major General Ibrahim gave a speech in which he pledged that he and his team will continue to do everything in their power to liberate the hostages regardless of the dangers involved.

“I am honored to be present in a land that embraces its sons and daughters; in a country that preserves the lives of its citizens and their rights

It is an honor to attend this honoring ceremony not only in gratitude, but also in appreciation for the value of freedom that is a basic right to every single human being 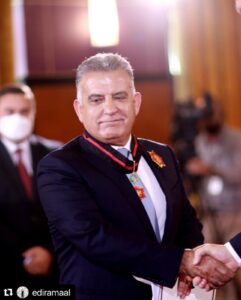 Albania, like the vast majority of the countries, has suffered from the catastrophes of terrorism in the world. Albania, as a society and officials, has paid a heavy price during the course of two years; women and children were detained, and their fate was

This file, right from the start, has been the priority of His Excellency the Prime Minister, and the centre of his continuous attention, requiring careful follow-up and non-stop efforts to complete the process of liberating families from “Al-Hawl” and

“Roj” refugee camps in the rural area of Al-Hasaka, Eastern Syria-run by the Kurdish Forces

General Ibrahim: I call upon the leaders of the world to work on spreading the language of peace instead of the language of war and grudges, and that dialogue prevails among them so that they solve the disputes for the good of humanity and its right to live in freedom and safety

The negotiations weren’t easy, and the extent of suffering was enormous. In response to the anxiety and fear of the families, the state has assumed responsibility towards its citizens. The efforts have succeeded in bringing back the children and women; and the feeling of giving them back their freedom cannot be described

The day of their release is a day of freedom to each of us, a day of freedom for Lebanon as it is for Albania. Despite the conditions that Lebanon is going through, it continues to extend a hand of giving to its friends and to the international community

I want to assure from where I stand now, as well as from wherever I go to, that we shall spare no effort to negotiate for the release of any detainee, despite the difficulties we face and the problems that we always insist on overcoming.  Despite the risks that our personnel in the Lebanese General Security are exposed to on the ground while heading to the dangerous area for the first time, we do realize the meaning of freedom and the sense of security and safety; and we do know very well the tragedies of arrest, detention and fear.  Finally, I would like to express my heartfelt thanks to His

|Excellency the Prime Minister Mr. Edi RAMA, and all the officials for this honoring, that I want to dedicate to Lebanon and to Albania, and to everyone who works for the sake of the mankind and his freedom in this world

On this occasion, I call for the release of all detainees in the world, and freeing peoples from terror and fear, and for the leaders of the world to work on spreading the language of peace instead of the language of wars and hatred, and that dialogue prevails among them to resolve conflicts for the sake of the mankind and his right to live in freedom and security

General Ibrahim: despite the circumstances that Lebanon is going through, Lebanon continues to extend the hand of giving to his friends and the International community

Then, Prime minister Rama hosted General Ibrahim and the attendees at a lunch banquet at the government presidency palace

General Ibrahim began his  official visit to Albania on October 7 , 2021 with two meetings , the first with the Speaker of the Parliament Lindita Nikolla and the second with the minister of Interior Blei Çuçi. On the second day of his visit , General Ibrahim met the Prime Minister  Edi Rama and the Head of the Intelligence Service Helidon Bendo 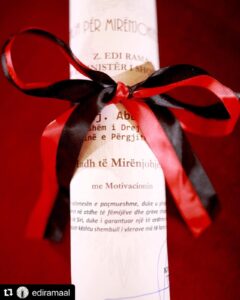 Considered as the top Medal in Albania and it is awarded as a token of national gratitude from the Albanian State . It has been awarded so far to the head of the European Council Donald Tusk , the outgoing German Chancellor Angela Merkel , the Archbishop of Aquileia Charles John Brown, the Ambassador of Austria to Albania Johann Settler, the Academician from Kosovo Rexhep Qosja